The site is secure.
The https:// ensures that you are connecting to the official website and that any information you provide is encrypted and transmitted securely.

HONORARY MEMBER OF THE REGIMENT 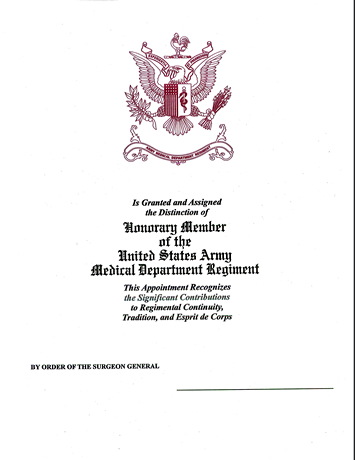 1. A description of the criteria for nomination of individuals to the position of Honorary Member of the Regiment and the process for nomination to this position are as follows:

The HMOR is program is designed to recognize individuals who are not affiliated with the AMEDD Regiment, but have made significant contributions to the AMEDD. Requirements for this position are that the individual is not eligible for recognition as a DMOR but has a long and close association with the AMEDD Regiment, or has performed a significant act or service for the Regiment. The HMOR may also be used to recognize exemplary service to the AMEDD and the Army by non-AMEDD Soldiers and civilians. An example would be a departing Corps or Division Commander or Command Sergeant Major. In addition, the spouse of an individual nominated for the DMOR may be nominated for the HMOR provided they are not an AMEDD Soldier or an affiliated AMEDD civilian employee, have supported their spouse and the AMEDD, and have been married to the AMEDD Soldier or civilian for a period of at least 10 years. In this situation, a statement must be added in the DMOR cover letter. Contractors are not eligible for this recognition. Nominations should be submitted 60 days prior to the anticipated presentation date.

a. For Officers, this should be through their immediate supervisor or the individual who submitted them for their retirement award. As the nomination requires confirmation that there are no adverse personnel actions pending, (see 4a below) the nomination should also include the Company Command.

c. For civilians, the nomination should go through their immediate supervisor, department head, and the civilian personnel section.

3. Nominations consist of a Cover Letter and a Justification:

a. A cover letter example

which provides the nominee`s name and rank/grade. The nominator should also provide his/her full name, mailing address, e mail, and phone number to assist the Regimental Office in obtaining further information, if needed. The nominator should state the proposed presentation date and specify which address the certificate should be forwarded if the nomination is approved. The nomination must also include the following statement: "There are no adverse personnel actions pending on the individual being nominated"

b. A justification limited to no more than 2 pages, discussing the nominee`s contributions to the AMEDD.  For the spouse of a DMOR nominee, the request for HMOR is included in the DMOR cover letter.

c. PLEASE DO NOT ENTER THE SOCIAL SECURITY NUMBER ON ANY DOCUMENT

d. The nomination and supporting documentation, should be forwarded to the AMEDD Regimental Office via electronic mail at the following addresses:

4. Contact the Regimental Office at Commercial (210) 221-8455, or the email address provided in paragraph 3d for additional information.